After experiencing some delays in the St Mary's area of Adelaide, South Australia Tangerine Telecom is now placing orders for NBN broadband services. We thank those customers who have been affected by this delay for their patience. Anyone who has placed an order with us for NBN in this area will be receiving their activation appointment information today.

The St Mary's POI (fibre exchange) services a large area of Adelaide. Areas include Marion, Melrose Park, Cloverlly Park, Panorama, Belair, Lynton, Blackwood, Eden Hills, Craigburn Farm and Bellevue Heights to name a few. The area is serviced by fibre to the node (FTTN) technology. This is where fibre is used to deliver high speed broadband to your street. This then connects at a node to the copper cable that is running to your home. The map below shows the coverage area as of 8th July 2016. The purple area shows the suburbs and streets that can order NBN services right now. The green area shows the next area that is due to have construction. 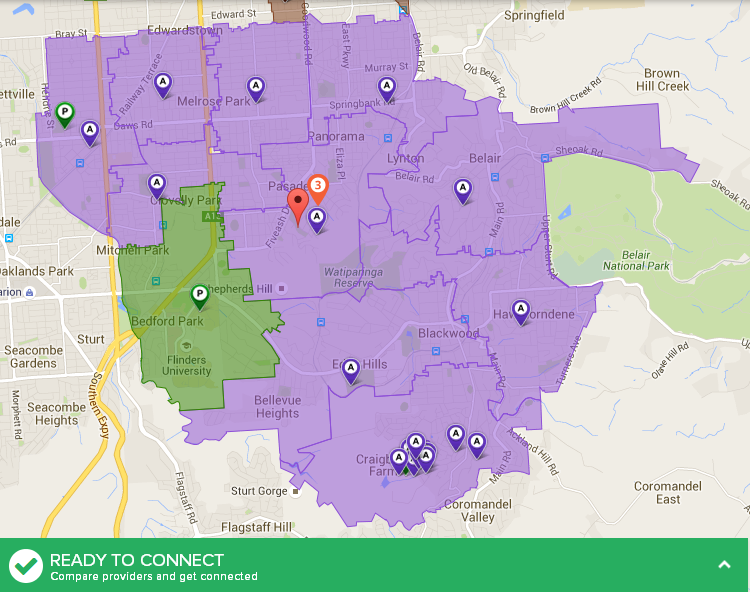 St Mary's is a suburb of Adelaide and is part of the City of Mitcham local government area. It is one of the first areas in Adelaide to receive the FTTN NBN technology. FTTN was introduced by the now current government in a hope to speed up roll out of the NBN. It was also hoped that it would reduce costs on construction of the new broadband network. As the FTTN service was developed it is now argued that it will take just as long, and cost just as much as the original fibre to the premises (FTTP) NBN design.

NBN users in St Mary's should be able to achieve speeds of up to 100Mbps download. Maximum speeds will rely much more on the distance of copper used to deliver the NBN service from the node in the street to you home.

A VDSL modem is required to access NBN services on FTTN technology. These are supplied as part of all Tangerine Telecom NBN plans. these are pre-configured before they leave the manufacturer to make connecting to Tangerine NBN as easy as possible.